Swords Orthodontics
17 Main St, Swords, Co Dublin, Ireland
Swords Orthodontics > Blog > Movember Day Nine
We've Got a Smile for You!
Welcome to Swords Orthodontics. If you're unhappy with the appearance of your smile, or the way your teeth meet or line up, then let’s see if we can help you – we specialise in the area of dentistry that deals with the position and alignment of the teeth.

Movember continues, but my conference finished this afternoon. Our speakers were Nigel Harradine and David Birnie who were presenting their long running series of lectures called "Excellence in Orthodontics". I first saw them in 1999, and it's amazing how much orthodontics has changed since then. Some of the stuff that we'd be used to now was just experimental then, and indeed some stuff - like Invisalign aligners - weren't even being mentioned at all.

If you went back another half generation, the stuff I was learning then was relatively futuristic compared to what my orthodontic lecturers had learnt when they were training.

It's fair to say that orthodontics now is considerably more comfortable for the patients, with quicker appointments and probably shorter treatment durations and better results than it was 20 years ago.

And that's why it's important to keep going to conferences and courses and review what you're doing, comparing it to what's currently possible.

And as for the Mo... no photo of me today, but there will be a new one on Monday or thereabouts. Meanwhile, a new Mo-hero, especially for this weekend. 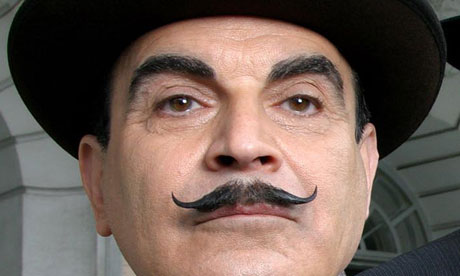 A slightly more attainable version of the Dali moustache from earlier in the week, this is more effort than it looks as the hair at the ends has to grow extra long, and then get shaped with moustache wax. But a small price to pay to be the guy that solves the murder on the Orient Express.

Tips for having Braces on During the Easter Break