Swords Orthodontics
17 Main St, Swords, Co Dublin, Ireland
Swords Orthodontics > Blog > The Last Normal Photo
We've Got a Smile for You!
Welcome to Swords Orthodontics. If you're unhappy with the appearance of your smile, or the way your teeth meet or line up, then let’s see if we can help you – we specialise in the area of dentistry that deals with the position and alignment of the teeth. 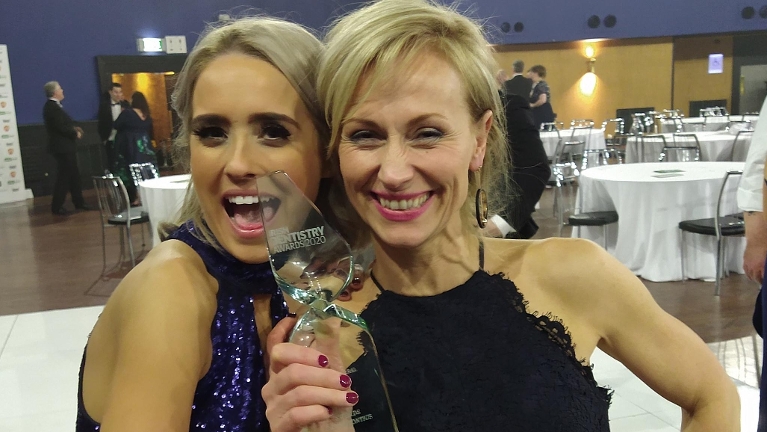 There was a phrase trending on twitter recently: #lastnormalphoto. The idea was that you’d share the last picture you took before lock down. At first I thought they meant any photo not dealing with teeth, because it’s not normal to take photos of teeth…..is it? But they meant photos taken before lockdown all kicked off.

Strangely, my last “normal” photo was teeth related. By coincidence it was taken on February 29th, an unusual day at the best of times, and on this particular February 29th, the first Covid case was reported in Ireland. I was unaware of that at the time, as I’d spent the day at an Invisalign course and the evening – where the last photos were taken – at the 2020 Irish Dentistry Awards.

Usually the team from Swords Orthodontics comes to these events with me, but this time around there was a variety of maternity leaves and other personal commitments and it was only me representing the practice.

In some ways, the world of dentistry is a relatively small one. The photo is of me and Nadine McAloney, who is an oral surgeon at Fortwilliam Specialist Dental Clinic near Belfast. Nadine is married to a guy who was in Dental School with me, but I knew each of them separately before they met – she’d been part of the oral surgery team in the hospital where I trained as an orthodontist and her boss at the time later moved back to Ireland and is the man who carries out the orthognathic (jaw) surgery on the Swords Orthodontics patients that have skeletal problems underlying their orthodontic problems.

I hadn’t seen her in about 20 years; a British Dental Association meeting in Belfast, as we’d both moved back to Ireland at different times ourselves. There wasn’t much chat as I had my arm in a sling at the time due to a bizarre kite flying accident and the guy giving me a lift had to get home. On this leap night reunion she was remarkably polite as she had no idea what my name was, but remembered that we had been in the same hospital back in the 90s.

“What are you doing now?”

“I’m an orthodontist. I have a practice called Swords Orthodontics.”

“…and what’s your role in all this? Why are you here this evening?”

“Errr… I’m here to celebrate dentistry? I’m not exactly sure what you mean.”

“Were you entered for any of the awards?”

“That’s mad, we were in that one too. How’d you do? Did you win anything?”

“Leinster Practice of the Year  - that was totally out of the blue – and Best Referral Practice, which was the one I was really delighted with  because obviously we’re a ref-”

This was interrupted by a lot of good natured swearing. I hope it was good natured. Her practice is referral based – like Swords Ortho, but probably more so than us – as it mainly sees patients that have been sent to them by other dentists and that was the award that she was chasing too. Her team wanted to see the awards, and I felt like Ted Rogers, the host of 80s TV game show 3-2-1 who had a recurring catchphrase when he'd commiserate with the contestants "here's what you could have won..."

I have blogged on the nature of dentistry awards before. I guess most actors would like to win an Oscar, but even though many of the well known ones - and almost all of the others - won’t, it doesn’t stop them appearing in movies. They do a job they love and so do we. We’ve certainly failed to win a lot more often than the times we won, and we’ve entered a few where we didn’t even make the shortlist. But entering makes us a better practice. It makes me a better orthodontist to sit down and examine my work closely and be as critical as a judge who is comparing it to something that another orthodontist did.

Given the 11 weeks that have followed since that night, it seems like it could only be on another planet that hundreds of people gathered in the Mansion House on one night to compete at “who’s best at looking after the nation’s teeth”. In another way, we should be grateful for a life where we can put an emphasis on such things. I’m pleased to say we’ve taken some extra precautions and made some additions to the procedures and equipment at Swords Ortho and now we’re back to treating patients routinely and the details that decide the outcome of an award are things that we can occupy ourselves with once more.