Swords Orthodontics
17 Main St, Swords, Co Dublin, Ireland
Swords Orthodontics > Blog > Some People Smile.....
We've Got a Smile for You!
Welcome to Swords Orthodontics. If you're unhappy with the appearance of your smile, or the way your teeth meet or line up, then let’s see if we can help you – we specialise in the area of dentistry that deals with the position and alignment of the teeth.

....actually loads of people smiled, at a reunion of The Blades.

The Blades were one of the legendary Irish bands of my childhood. They released a series of monumentally good singles in the early 80s and were widely loved by audiences around the country. They were largely synonymous with their singer Paul Cleary - who wrote an Irish charity single for famine release "Show some concern" as well as his work with the band. Musically they worked in an area that was a bit like the Jam or The Beat but more rock/ska/soul than mod/new wave.

Years later, when I got a round-Europe train ticket and my first rucksack, I wrote "Last Man In Europe" on it in tribute to one of their songs - which was the one they opened their show with last week. The other legendary Blades songs that you should look out for would include "Bride Wore White", "Ghost of a Chance", "Downmarket" and "Revelation of Heartbreak" and "Some People Smile" - which is about a guy that doesn't have much to smile about. 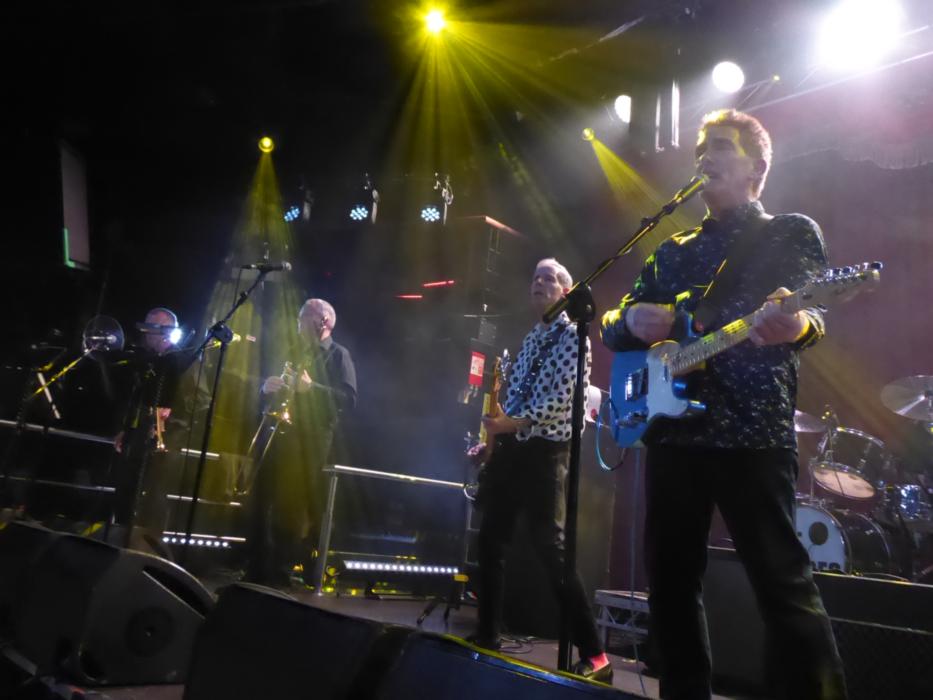 The nature of rock bands generally is you have to get big or get out. The Blades started off around the same time as U2, but they didn't get big enough and they wound up the band in the mid-80s.

But now and again, as the winter solstice approaches...they come back together, and last week I finally got to see them, 4 decades on from listening to Vincent Hanley or Ronan Collins or Marty Whelan on RTE Radio 2.

They were mighty. The audience was 100% behind them, and they were 100% behind their audience. When one guy was asked by security to stop jumping up and down, he appealed to  Paul Cleary to help. The singer advised him to jump up and down in his head.

And the lessons from the show:

Do your best work, even if the audience is a small one.

The Blades made great music for a relatively short period of time, and 40 years later, people come out on a rainy night to hear them perform it once more. That might be the only show that they have played in months, but they were tight - well rehearsed and arranged. Most patients only see a fraction of the work that a dentist does. But another dentist might see all of it., and they will know if it is good or bad. Since an orthodontist's patient will return to their own dentist at some stage, an orthodontist will want to do work of a good calibre because they know it will be seen by an audience that might be small, but it will be well informed and knows what to expect.

Practically every other song had some sort of dedication to someone in the audience that the band knew, or someone that they had worked with, or were related to. Their stories weren't necessarily happy ones, and the band were well aware of the struggles some of their crowd faced. As a dental nurse I worked with years ago said to me "Stephen, you don't know what does be going on in people's lives". So simple, and so obvious, it's easy to overlook its truth.

Not so much the big things like "should you form a band" but the simple things like "Should you go to see a band"? The weather was miserable, it's the start of December, it would be easy to stay at home. But this band might never play again. Now is the moment we have to see them. When I went back to my car I recognised some people from the audience in the lift and asked them if they saw the Blades first time around. One guy said "if everyone who says they saw the Blades actually did see the Blades, they wouldn't have broken up" - in other words, there are a lot more people wished they'd seen The Blades than actually did see them. But one of the guys in the lift had seen them play their last show in the 80s before they broke up. I had a ticket to see Motorhead in 2016, but Lemmy died about 4 weeks before the show. I was devastated, but I would have felt even worse if I hadn't got a ticket and he'd died 4 weeks after.

So if you get the chance to do something simple that you think you'd enjoy, take that chance.

Particularly if it's going to see The Blades play live.