Swords Orthodontics
17 Main St, Swords, Co Dublin, Ireland
Swords Orthodontics > Blog > IDA Meeting 2015
We've Got a Smile for You!
Welcome to Swords Orthodontics. If you're unhappy with the appearance of your smile, or the way your teeth meet or line up, then let’s see if we can help you – we specialise in the area of dentistry that deals with the position and alignment of the teeth. 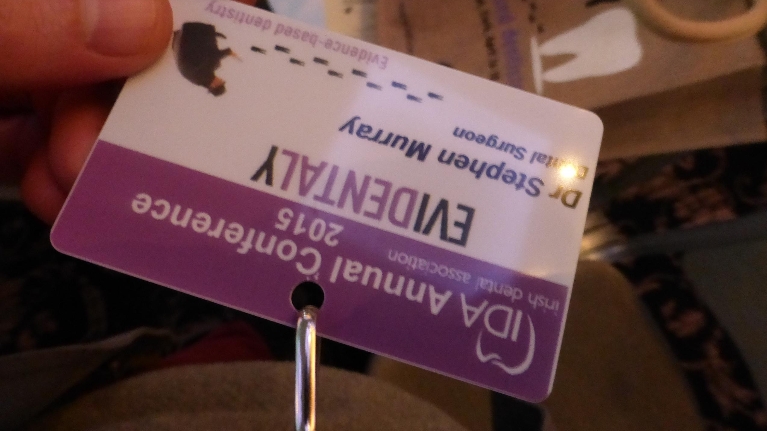 I am just back from the 2015 Irish Dental Association's annual conference. This year it was in Cork, and the theme was Evidence Based Dentistry - hence the event title "Evidentaly" which has mildly irritated me since I saw it first, as it is neither "Evidently" or "Evidentally" - neither a real word or a clever pun - but it does make you think when you notice something, and that was what the conference was all about. In any case, it was a great conference with some super lecturers.

There was a great lecture about the connection between gum inflammation and overall health, including heart disease, digestive disorders and mental deterioration. This is a topic that has been in and out of dental journals for some time now and I had been sceptical until about 5 years ago when I heard a cardiologist at the World Orthodontic Congress in Sydney explain that his specialty took this seriously. In keeping with the theme of this year's IDA conference, the lecturer explained that conclusive evidence for oral inflammation will be a long time coming, but there is enough of an association for the matter to be taken seriously. The long and the short of it is that everyone should take more care of the health of their teeth and gums. Surprise, surprise! But the benefits could be well beyond the mouth.

There was a great lecture on how teeth wear down and are eroded by various acidic things - not just due to tooth decay. This could be eating disorders like bulaemia, digestive disorders like gastric reflux (and 25% of people may suffer from this condition without knowing) and also due to food, drink, industrial chemicals and even badly monitored swimming pools. This was a fascinating lecture, and as more people are keeping their teeth to a greater age, it will become more relevant in the years ahead.

The topic of looking after the teeth of an ageing population also came up in a lecture for hygienists by Mhari Coxon, who gave 4 talks in one day - to dentists, dental nurses, and dental hygienists.

There were lectures on many other aspects of dentistry, including a couple of super talks on X Ray safety by Andrew Bolas, the former president of the IDA,  and the launch of the 2015 Code for Cross Infection Prevention and Control, which will affect dentists in Ireland for years to come.

The special guest lecturer this year - a non dental speaker - was Ben Goldacre, the popular science journalist who writes on the mis-reporting and mis-representation of science in a way that is often overlooked by mainstream media and can be harmful to the general public who don't know any better and trust doctors and dentists and professional scientists who could just as easily be misled.

Next year's Irish Dental Association conference is under the presidency of PJ Byrne and it will be on the theme of Dentistry of the Future and take place in Galway on April 21st to 23rd 2016. We can't wait!